An open space between the small streets of the old city

In 1860, the opening of La plaza Real in an empty space that was previously occupied by the old convent shifted the centre of Barcelona next to La Rambla. Distinguished and elegant, its Napoleonic architecture attracted the most affluent families and the best restaurants of the city.

Despite the fact that in the course of time the centre of Barcelona shifted to diverse areas, La Plaza Real has preserved its special physiognomy as an open space in between the small streets of the old city, packed with popular restaurants, pubs and clubs.

The Fountain of Tres Gracias, designed by architect Antoni Rovira i Trias (who was the responsible of developing the Cerdà plan at L’Eixample), the lanterns designed by Antoni Gaudí, and the gigantic royal palm tress, confer a timeless touch to the square. Alongside to the artists, the bohemians and the travellers who have frequented it in the course of its history, the masses that frequent it today offer to it a contemporary touch. La plaza Real is an indispensable meeting point. 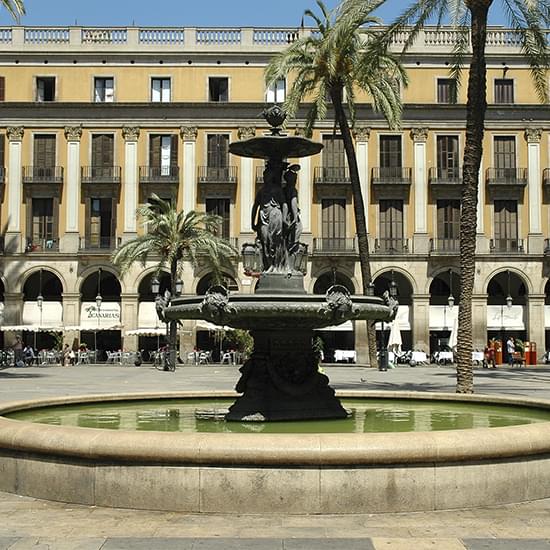